A Short History of Kyoto University

Kyoto Imperial University was founded in 1897 (Meiji 30) as Japan’s second university. Following the Meiji Restoration Japan adopted various western systems in order to build a modern state, and the educational system was no exception. At the time of the founding of Kyodai, the popular nickname for the university, students were required to have completed four years of compulsory elementary school education, two years of upper-elementary school, five years of middle school, and three years of higher school. The first national university, Tokyo University (later known as Tokyo Imperial University), had been established in 1877 to prepare government officials as legal and technical bureaucrats for the new government.

The increasing number of students seeking to advance to the imperial university and the need for talented individuals for the industrial expansion that followed the Sino-Japanese War were behind the founding of Kyoto Imperial University. The fact that the College of Engineering and Science was the first to be established seems to reflect these circumstances. The colleges of Law and Medicine were later founded in 1899, and the College of Letters was established in 1906. The foundations of the general university were thus laid.

Since its inception Kyodai put into practice an educational system that stressed student independence and emphasized academic freedom, creating a unique academic atmosphere. When in 1913 (Taisho 2), the entire educational staff centered on the College of Law rose in protest against dismissal of seven professors by Sawayanagi Masataro, then university president, who had acted without consulting the faculty council, this ultimately resulted in the Ministry of Education recognizing that faculty council approval was required in the hiring and firing of professors. Additionally in 1919, Kyodai contributed greatly to the advancement of university autonomy with the adoption of a system of open election of the university president by the faculty for the first time in Japan.

The Japanese system of higher education underwent a period of great reform in the years following the First World War. The increasing number of graduates from secondary educational institutions and the effects of the expansion of industrial production led to a demand for the expansion of institutions of higher learning. The establishment of public and private universities and colleges was first recognized by law in 1918, and the pre-existing colleges within the universities were renamed faculties. The number of universities was greatly increased due to this reform. The five Japanese universities that had existed in 1918 grew to forty in 1928 (Sho wa 3) as the status of vocational schools was elevated to that of universities. Moreover, the number of higher secondary schools that were designed to prepare students academically for entrance to universities also greatly increased during this period, with the number jumping from eight in 1918 to 31 in 1928.

Amidst these changes, the organization of Kyoto University was expanded during the period. In 1919 the Faculty of Economics was made an independent body separate from the Faculty of Law, and the Faculty of Agriculture was newly created. Then in 1926, the Institute for Chemical Research was established as the first attached institute. In addition, the existing faculties were expanded. In the decade between 1918 and 1928, the number of students mushroomed 250%, from 1,717 to 4,369. Moreover, other reforms were instituted during this period; the academic year that had begun in September was altered to begin in April, and the retirement age for the teaching staff was set at sixty years of age.

During this period Kyodai was widely known as a site of active research and for having assembled a full complement of outstanding scholars of “Oriental Studies.” The philosopher Nishida Kitaro was also famed for his effort to express oriental thought through occidental concepts and theories. In addition, the Marxist Kawakami Hajime of the Faculty of Economics had a wide following and support among the student body. 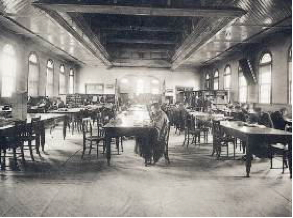 In 1937 Japan plunged into full-scale war with China. By December, 1941 it had declared war on the US and Great Britain, and the fighting had spread to Southeast Asia and the Pacific. Accompanying these developments the domestic system suddenly took on an increasingly martial atmosphere, and the universities were re-organized in accordance with the national plan. At Kyodai, the Faculty of Engineering was expanded and a number of new attached institutes were established. Furthermore, in terms of research, there were not only numerous research meetings concerned with continental China and Southeast Asia, but quite a few researchers conducted research under the aegis of the military.

As the war grew increasingly dire, students were mobilized to work as laborers in factories and farms that were experiencing a labor shortage due to the draft. Moreover, the special exemption from the draft that had been granted to students was suspended, and many students, chiefly from the liberal arts, entered the ranks of the military. Almost 4,500 students from Kyodai were drafted, 264 of those students are known to have died at the frontlines. Due to the mobilization of students into the labor force and the military, education of students at the universities became virtually impossible during the final stages of the war.

In August of 1945 the Potsdam Declaration was officially accepted and the Second World War came to a close with Japan’s defeat. Thereafter, various reforms were implemented in the Japanese political and social systems under the direction of GHQ of SCAP. In 1946 the universities became co-educational. Previously, women had only been admitted to universities in special circumstances, and there had not been a single woman admitted as a regular student at Kyodai up to that point. However, that year seventeen coeds were welcomed to the campus. Moreover, in 1947 the designation “Imperial” was dropped from the university’s name and it became simply Kyoto University.

Under the new educational system, universities were institutions placed atop an educational pyramid at whose base was six years of elementary education, followed by three years of middle school and three years of high school. An education that had previously been restricted to a privileged elite was opened to the majority, and the number of universities increased greatly. Between 1948 and 1949, one hundred sixty-nine new style universities were initiated. The new universities were required to provide two years of general education during the first two years of the curriculum. In order to fulfill this requirement, Kyoto University, which was reformed under the new system in 1949, established a branch campus that came to be known as the Kyoy obu (College of Liberal Arts and Sciences) after 1954. At the same time the Faculty of Education also was founded. The reconstituted graduate school had been established in 1953, and thus the new educational system was fully implemented. 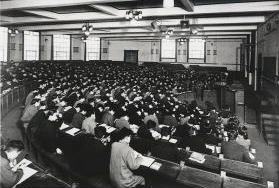 A Lecture Conducted in a Large Lecture Hall in the 1950s

Once Japan had entered the period of accelerated economic growth in the latter half of the 1950s, demands to expand the training of scientists and technicians came from both industry and within the government. The Ministry of Education put into place a plan for a large-scale increase in the number of students in the sciences and engineering at the universities. In response, new and expanded departments and chairs were initiated in the Faculties of Science and Engineering at Kyodai. Expansion in the Faculty of Engineering was particularly striking. In 1957 there had been 12 departments with 1,653 students matriculating in them, but by 1966 there were 22 departments and 3,632 students. Furthermore, the Faculty of Pharmaceutical Sciences was established in 1960, and other attached research institutes and centers were established one after another during this period.

As society grew increasingly prosperous, the percentage of students advancing on to higher education in the universities rose. In addition, when students of the baby-boom generation who had been born after the Second World War came of age in the latter half of the 1960s, Japanese universities suddenly became popular institutions of mass education. Due in part to the inability of Japanese universities to respond adequately to the popularization and to the appearance of social contradictions that accompanied accelerated growth and in combination with serious international political problems, such as the war in Vietnam and the revision of the security pact between the Japan and the United States, students in many universities rose up in a massive student movement, demanding radical reforms. In 1969 normal classes could no longer be conducted as students also went on strike at Kyodai, collective negotiations were held with the president of the university, and buildings were blockaded. Ultimately, the police force was called in, the blockades lifted and classes were recommenced. The student movement continued thereafter, spurred on by various internal university issues and political problems. The issue of the treatment of instructors in the Faculty of Economics was a particularly divisive controversy in the latter half of the 1970s, but the fury of the student movement gradually ebbed over time.

Through the decades of the 70s and 80s higher education policy moved along a settled course the as percentage of students bound for universities stabilized at a figure between 35 and 40 percent. The sharp increase in the number of departments, lectures, and students was also blunted at Kyodai during this period, but, by way of contrast, cutting-edge research was also being initiated, and various joint centers were being established in order to conduct both highlevel research and to fulfill rigorous academic goals. In addition, steady progress was made in strengthening links with society at large, in international cooperation and exchange, and in advancing information technology through the computerization of campus.

Japanese universities faced a great turning point following the 1990s. Behind the major changes that took place were the spread throughout society of the principles of competition, the relaxation of government regulations instituted during the financial crisis, and the rapid decrease in the population of 18 year olds. In other words, university reform can be understood as one facet of the structural reform that took place throughout all of Japanese society. Concrete examples were the loosening of rules on subject matter, which had previously been strictly stipulated by law, and the move to introduce competitive funding. On the other hand, it became the responsibility of universities to become accountable for their very existence as they became increasingly intertwined with the larger society. The change of the legal status of national universities in 2004 was the natural outgrowth of these social changes.

At Kyodai a more intensive general education system was implemented as the Faculty of Integrated Human Studies was established in 1992, replacing the College of Liberal Arts and Sciences. Furthermore, the graduate schools were strengthened and centers that conduct unique varieties of research were established, setting the foundations for advanced research. In addition, in 2003 a new campus was constructed in Katsura on the western edge of Kyoto to which the Graduate Schools of Engineering and Informatics were moved, creating a new site for research and education that is designed to meld technology and the sciences.